Coco Ichibanya, one of the only vegan-friendly fast-food chains in Japan, has a new vegan item on the menu.

With the departure of the beloved vegan curry soup, which had its final day on the menu on February 29th, 2020, the Japanese-style curry chain introduced the 100% plant-based soy meat menchi katsu (fried minced meat patty; menchi = minced, katsu = cutlet) just one day later, on March 1st, 2020.

The launch date was likely not a coincidence—they cleverly did this in order to keep hype high, and I applaud them for this.

I couldn’t contain my excitement and promptly headed over to their Kamata shop just a few days after the launch. I immediately rummaged through their (quite large) menu, frantically looking for the vegan katsu.

It’s available as a topping on any curry of your choice and will run you ¥157. It’s actually quite a bit cheaper than the meat menchi katsu, which costs ¥262.

Currently, Coco-Ichibanya has 4 vegan curry options—plain (just curry sauce), mixed vegetables, eggplant, or spinach. You can also get their special “zanmai” curry, which comes with both eggplant and spinach. However, for some reason, the zanmai option is not on their English menu so it’s best to look at both the Japanese (which oddly still has everything translated into English) and English menu so that you can see all possible options.

When ordering, you can adjust the level of spiciness and amount of rice. If you like spicy food but don’t want to overdo it, I would recommend level 3, which is 4 times spicier than the standard level. Anything more than that is a bit too much to enjoy. However, if you are a true glutton for punishment than you can go all the way up to level 10. For the rice, there are three options: normal (300g), less (200g), or more (400g).

I ordered the zanmai curry with the vegan katsu (level 3 spiciness; normal rice) which was promptly brought out in about five minutes.

The name—soy meat menchi katsu– might be a mouthful, but the real-life version is not.

It was a tad smaller than I was expecting, especially when comparing it to the other “normal” katsu options.

Nonetheless, it tasted surprisingly meat-like, and the texture was on point. It helps that it’s minced meat, which makes it easier to imitate since it’s mushy anyway.

I also had my non-vegan boyfriend try it, and he said that he would be fooled into thinking that it’s real meat! I am not sure why vegans always feel the need to feel validated by non-vegans, but it is so victorious when we are.

The curry itself was, as always, fantastic. Warm, comforting, and just spicy enough.

I paid ¥1075 for my meal, which is quite cheap considering how filling it is.

Coco, you keep me coming back for more. I hope their creative streak continues and they come out with more vegan options—not just in the lead up to the Olympics, but for good. 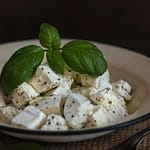 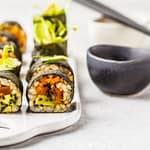 The Best Restaurants in Tokyo with Vegan Sushi Next