Ah, to answer the age-old question, what’s for dinner!? Well, I am here to hopefully provide some inspiration for those weekday nights where you are just lost on what to make. These are my tried and true, favorite vegan Japanese dinners, and their recipes. Especially for these cozy winter months where making food at home will be a necessity, these vegan Japanese dinners are my absolute go-to’s!

Nabe is perhaps the most underrated dish in the game. Seriously what is easier or tastier than popping on a hot pot of simmering broth and tossing all the veggies in? The correct answer: nothing.

Some of my favorite veggies to include in my nabe are enoki mushrooms, shimeji mushrooms, shitake mushrooms, napa cabbage, carrots, any kind of potato, pumpkin, daikon, and negi. You really can put any and all veggies in there, it’s your creative hot pot! 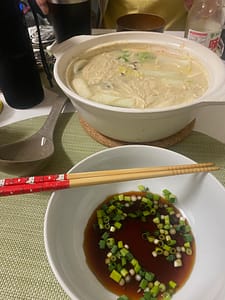 Nabe with All the Veggies

Some other things I like to add in are tofu, ramen noodles, Tororo kombu, kimchi, sesame seeds. If you have something in the fridge that would taste good in boiled broth, throw it in there!

I love to switch up my bases as well so I never get bored. Sometimes I make a miso base with kombu dashi and soy sauce, other times I will make a soymilk broth with soymilk and vegetable broth. Another favorite of mine is a kimchi base with is kind of like the Korean dish Chigae.

Then when it comes to dipping your nabe goodies, I love a gentle ponzu (yuzu flavored soy sauce and vinegar but be careful not to buy one with katsuodashi in it) mixed with some chopped spring onions.

See? SIMPLE! But oh so warming, comforting, and delicious on those cold winter or autumn nights.

Okonomiyaki is probably my favorite Japanese food. It is severely overlooked in the world of Japanese cuisine if I do say so myself. A savory pancake filled with veggies! I am sold.

It is also one of the easiest vegan Japanese dinners to throw together at home. All you need is a mountain potato, some flour, shredded cabbage, and ginger. I just simply grate the mountain potato, which foams up and acts like a binder for the other ingredients. I usually grate half a mountain potato. 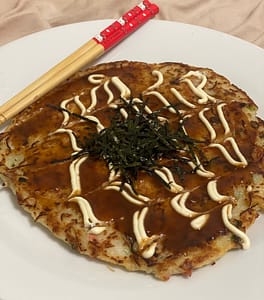 Then, I add in a handful of cabbage, a bit of grated ginger (the pink shredded one), and just a few tablespoons of flour. I mix this until it has a batter-like consistency and then throw it on an oiled pan.

I let each side cook for a few minutes, and then I smother it in tonkatsu sauce (usually vegan!! But check the ingredients), add some pretty swirls of vegan mayo, and toss on some shredded seaweed. Ta-dah! The perfect savory meal that is quite filling as well.

You could also definitely experiment with what you add into your okonomiyaki, next time I think I am going to add in some mochi!

Gyoza is the perfect dinner if you are craving something crunchy and fried. The positive is that even though it is fried, you can make the inside ingredients quite healthy!

My favorite additions to the inside of my gyoza include mushrooms, firm tofu, onion, grated carrot, ginger, garlic, kimchi, and cabbage. I think marinating and sauteeing the ingredients first will give it the best possible flavor. Some of my go-to’s are Chinese five-spice, chili pepper,  and soy sauce. 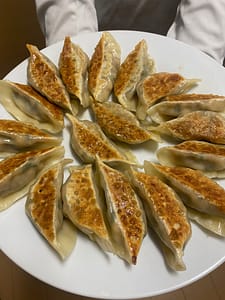 After all the filling is prepared, it is fun to try and wrap your little gyozas. The wrappers are usually sold in the meat section and I just place about one tablespoon of filling in each. Then you wet your outside of the shell so the wrapper will stick, and try to come up with pretty designs. I always fail horribly, but I enjoy the process.

Add some sesame oil to a hot pan and then place your gyoza flat side down, and after they fry for a few minutes add some water and cover them. This will ensure that the entire gyoza will cook nicely.

I like to make my own dipping sauce with soy sauce and white wine vinegar. Usually, I make about 20 gyoza and it’s easy to freeze them after filling the wrappers and save them for another night!

Ramen of course is a must on this list. There are actually quite a few vegan ramen packs circulating out there right now, so it’s easy to just pick up one of those and then add whatever toppings suit your fancy.

Personally, I enjoy making my ramen from scratch. My favorite recipe has to be from Vegan Foodie Cooks, and I recommend this vegan tantanmen to anyone who will listen. Here is the link for Vegan Foodie Cook’s page so you can find the exact recipe! 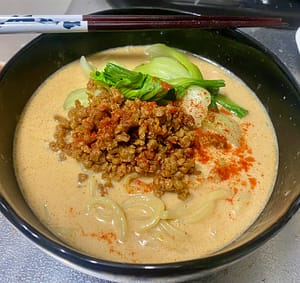 It’s creamy, has a rich flavor, and I love the soy meat crumble on top. The recipe is super easy to follow as well.

It requires you to soak some small soy meat crumbles in a marinade for a little bit while you make the broth. The broth is a combination of plant-based milk and tahini paste-how creative!

This broth in combo with the marinated soy meat, chili oil, bok choy, and chewy noodles hits all the right notes.

I got turned onto rolling my own vegan sushi by none other than Foodie vegan guide Anna. She showed me just how fun and versatile it can be to make your own sushi at home because quite surprisingly Japan’s vegan sushi game is lacking.

All you have to do is get the big sheets of nori, flatten some rice on top of them, and add whichever ingredients sound tasty at the moment! In this blog post, Anna talks about what she likes to use to make her veggie sushi! 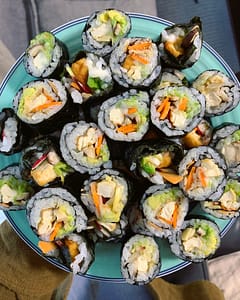 Some of my sushi filling ideas include tofu, carrots, cucumbers, vegan mayo, and kimchi. I am not kidding when I say, just like the nabe, you can really add anything in there. I would even be down for some fruit sushi!

Once you have filled it to your heart’s content, you roll the nori sheet and there you go! Professional status sushi minus the fish. I like to drizzle hot sauce or sesame seeds over my finished product- I know, not very Japanese-style. But it is tasty!

Japanese curry rice is perhaps the easiest meal you could ever make. This may be in the starter pack of vegan Japanese dinners to make at home. 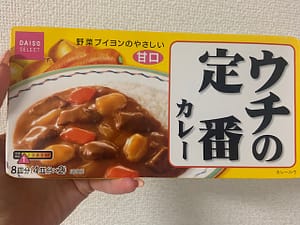 Step one: go to Daiso and located a vegan curry roux package.

Step two: cut veggies like potatoes, carrots, broccoli, eggplant, lotus root, and put them on a burner with water. Let them cook for about 20 minutes.

Serve with any type of rice you like! Did I mention that this one was really, really easy?

I think discovering there was such a thing as vegan karaage, fried chicken, in Japan probably was one of my happier moments. And when I discovered that actually soy meat karaage is just as good if not better than regular karaage? Okay, the happiest moment.

Soy meat karaage can also be made at home even though it is a popular vegan dish you can find around Japan at restaurants.

All you need are four or five ingredients: bigger soy meat chunks, garlic, soy sauce, cooking oil, and cornstarch. I guarantee your supermarket has all of those, and if not soy meat chunks can be bought online at Alishan. You can head to Alishan’s online store here! 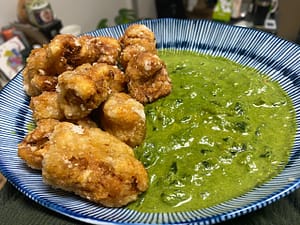 I like to marinate my dried soy meat in water, soy sauce, and garlic for at least 30 minutes. Then I coat the little nuggets with corn starch while I let some oil heat up in the pan. Add the soy meat in sections, be careful they are not touching one another or they will stick, and then flip them every three minutes or until they are all golden brown.

Soy meat karaage can basically be topped with anything, but I usually just eat it plain, with hot sauce or my vegan mayo.

Tonkatsu is fried food heaven. It is something I always thought I was missing out on until I learned to cook it at home! This was way before the times of vegan katsu curry from CoCo Ichibanya by the way.

The trick is to press your firm tofu for a while. If I lost you with “pressing tofu”, have no fear, this technique will be your new best friend. Wrap your tofu in a few paper towels and set it on a plate with something heavy, like a pan on top. This will make the water leave the tofu and condense its shape. Make sure it is not too heavy though, or else your tofu could break. This will give your tofu a lovely consistency which is chewier than before. 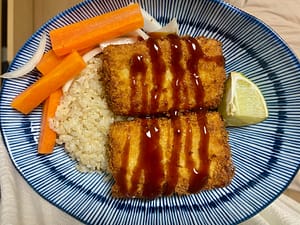 The recipe I use for my vegan tonkatsu comes from my beloved Rabbit and Wolves. Its ingredients are easy to find in Japan, and it calls for the double coating of batter to ensure maximum crispiness levels. This is roughly the recipe I use for maximum deliciousness!

After you have successfully made your tonkatsu, feel free to load on the tonkatsu sauce and add some pickled vegetables as your side.

I will travel far and wide for my beloved curry udon. I mean I travel to Kyoto yearly just to get vegan curry udon from my favorite shop called Mimikou. In Tokyo, I’ve yet to find veggie curry udon so that’s why I have settled on just making my own usually.

There is no official curry udon recipe that I stand by, but I just boil a bunch of veggies like eggplant, carrot, potato, and onion and then add in the curry roux cube from Daiso. Then I add in some cooked udon, and maybe so much vegetable broth to make the curry a bit thinner. This makes pretty decent curry udon in my humble opinion. 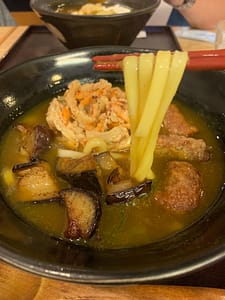 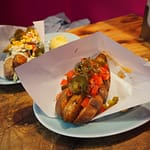 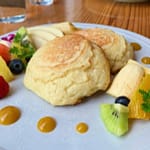