How To Stay Vegan In Japan’s Countryside

Let’s be real, traveling as a vegan in Japan is not an easy feat. Finding options in Tokyo can be difficult enough, let alone in middle-of-nowhere Japan.

Nevertheless, it’s important not to hold yourself back from traveling simply due to a fear of not having anything to eat.

Below are some practical tips on how to survive as a vegan in rural Japan.

Survival guide for eating vegan outside of the city

Look for traditional food that can be easily veganized Japanese food has several dishes that can be veganized. These include soba noodles, tempura, and udon noodles. For soba and udon, it’s best to ask for them chilled and then add your own soy sauce for seasoning as the traditional tsuyu is made with bonito flakes.

You can also try to look for other cuisines that are often vegan-friendly, such as Indian, Italian, or Chinese. Indian restaurants always have abundant vegan curries; Italian restaurants can likely prepare a marinara pizza or pasta pomodoro; Chinese places can whip up a veggie stir fry for you.

Book accommodation with a kitchen If options are truly scarce, then it’s best to book an Airbnb or hostel that has a kitchen so that you can prepare your own meals.
Go to the local grocery store, stock up on produce, and make something simple for yourself!

I know it can be annoying to be on holiday and still have to cook, but ultimately it is a much cheaper and healthier way to travel.

Search for vegan food in Japanese

I usually use Google Maps to search for vegan options in my area, and I’ve found that searching ビーガン (vegan) or ベジタリアン (vegetarian) in Japanese yields better results than if I type it in English.

Sometimes people write reviews about vegan options in Japanese that don’t come up in the English results. you may find some hidden options this way.

In order to double check if there are actually vegan options, go to the Photos and look under the “menu” category. Often times this gives a good feel for what the restaurant actually serves.

Talk to your waiter

Sometimes there is truly nothing on a menu that you can eat. In this situation, it’s best to ask your waiter if there is anything off-menu that they can prepare for you. If you don’t speak Japanese, this can be tough but you can always use Google Translate or print out a Foodie Adventure vegan card (seen above) and show this to the waiter.

They may be confused or flustered at first, but they should be able to prepare at least something simple for you.

Also, given that veganism is still a very new concept in Japan, this is a great way to introduce them to veganism and spread the word!

Go to an Izakaya Izakaya (Japanese-style bars) are surprisingly vegan-friendly. They almost always have edamame, some sort of tofu dish (ask for no katsuobushi/fish flakes), french fries, or stir-fried noodles.

Izakaya are not the healthiest of places so perhaps it’s not something you can do every night. However, they are really great when you’re in a pinch.

I hope this helps take some of the stress off of planning your next trip to the countryside. Although there will likely be some days without eating any significant source of protein, that’ s ok.

This won’t be forever, and soon you will be back in your own kitchen, cooking up delicious and nutritionally complete vegan meals again. 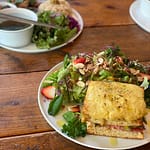 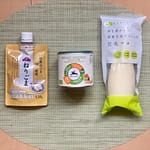 My Vegan Kitchen Staples Next